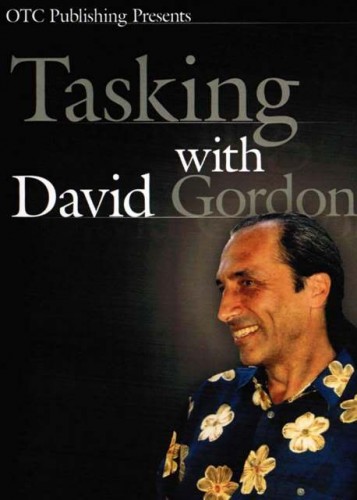 Introducing: Tasking With David Gordon
It may be the greatest question of all time. How do you get people who have a problem to change.

Introducing: Tasking With David Gordon
It may be the greatest question of all time. How do you get people who have a problem to change.

If you thinking telling, suggesting, or nagging are going to work, you might as well leave this page now. You’re living in dream land.

People are naturally resistant to change. One of my favorite expressions is, “The only one who likes change is a wet baby.”

As a student of hypnosis and NLP, I studied the experts in the world of change. I fell asleep deep inside the pages of Milton Erickson’s writings. There wasn’t a book of NLP I had not studied seeking the secret…

How can I assist a person who wants to change.

As a hypnotist running a busy office, I saw hundreds of people who said they wanted to change. But as soon as they left the office, they would attempt to sabotage the work that was done.

Out To Prove Me Wrong

Her first session was spent explaining hypnosis to her and she was a great subject. She returned two days later thrilled that she had eliminated eating junk foods. She gave away all the junk food in her house to her maid.

By the next session, Patricia was “done” with hypnosis. She went directly from my office to a supermarket where she bought and ate three boxes of doughnuts before leaving the store to prove she wasn’t under anyone’s “control.”

She came in to tell me she was happy to have proven hypnosis didn’t work.

She Wasn’t The Only One

I learned more about hypnosis sitting in my office seeing 8 or 10 clients a day than I had in reading thousands of pages of texts.

The majority of clients got their results, referred their friends, and left happy. But then there were others who found the most bizarre ways to sabotage their progress.

I plunged deeper into the books. Attended more trainings. Watched hours of videos. If someone claimed success in a certain area, I was on the phone with them pumping them for knowledge.

Then all of a sudden. The answer hit me full in the face. I picked up the phone and called one of the founders of NLP – and the greatest modeler of Milton Erickson – David Gordon.

Every Puzzle Has a Solution

When David Gordon published Therapeutic Metaphors (in my opinion – the single best book on NLP) I was on Cloud Nine.

I used Therapeutic Metaphors in all of my work. I even studied this technique in my doctoral dissertation.

But I was looking for something stronger.

I had read all of David’s books and been to many of his trainings but this time, I wanted the heavy artilery.

The question I challenged David to answer was…

How Did Milton Erickson Get People To Carry Out Tasks To Create Change?

The nurse Erickson taught how to eat beans and fart so she could overcome the shame of loudly farting in public.
The newlywed couple who discovered they both wet the bed and how Erickson had them deliberately wet the bed every night.
The uptight professor who was sexually repressed until Erickson forced him to give pet names to his wife’s breasts.
The woman with the biggest rear end in the world who was convinced no one would marry her until Erickson taught her one essential truth.
How Erickson got a pair of sexually repressed college professors to open up by using some language they weren’t used to.
Getting a man who was afraid of dating to start having a social life after setting him up on “the blind date from hell.”
Curiing a woman who was afraid to go outside her house by stomping on her foot.
Advising a couple who came to him for marital counseling to visit the zoo and climb Squaw Peak.
The Two Elements You Need To Know

Years ago, David prepared this one time training to an audience of hypnotists and other personal change people. As David taught, people were glued to their seats.

If you’ve never been in a live training with David, you are missing a rare treat. David is – in my opinion – the clearest and most engaging NLP trainer in the world. And in this new training, David created new pathways of understanding Erickson and his tasks.

When the training was over, we returned to our hypnosis offices and began changing lives.

And That’s When Disaster Struck!

David didn’t want me to release this training to the public. And so it has sat on my shelves for more than seven years!

Two years ago, David finally reviewed the videos and gave me permission to sell these DVDs but still I hesitated. Were these DVDs too comprehensive for the world at large? Would people use these powerful techniques ethically?

Or was I just sitting on them because I wanted to hoard this gold for myself. To be perfectly honest, I’m not sure. But I decided to make them available at this point.

Why? Because this period of economic challenge is see much suffering and we need people who can help people change.

It’s about finding out what people need and assisting them in making life long changes.

Note: These DVDs are scheduled to sell at $397. But they will not be available to ship until June 14. So I’m giving you a one week publication price discount of $100.

There are 7 DVDs in the set.