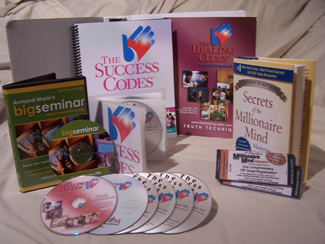 More specifically The Success Codes provide you with a simple to follow and easy to use technique which will allow you to effortlessly eliminate the underlying false and negative subconscious beliefs ( cellular memories ) that you have unconsciously absorbed over time which are ultimately responsible for limiting your overall results in life and keeping you from achieving the level of success that you desire and are quite capable of achieving.

Whether you want to admit it or not, there may be certain things holding you back, limiting your successes and achievements, and as much as you don’t want them to… they are and will continue to do so until you make the choice to do something about it.

Thanks to the latest in scientific discoveries, we are on the verge of breaking through and tapping into levels of human potential that previously were considered by most as impossible.

Science is proving that much of what we have come to believe with regard to health and success needs to be tweaked a little to fit with the latest discoveries. We are at a turning point which will change the course of history forever. Just as when it was discovered that bacteria although unseen was creating illness and killing people, new discoveries are being made which are going to enhance the lives of those who choose to become aware.

With the same sense of initial disbelief experienced when bacteria was first discovered, we are learning that success or failure stems from beliefs that are stored as memories all over your body. It is being found that these beliefs or memories, which have been accumulating since birth can and do have a tremendous impact throughout your life and if properly addressed can make major transformational changes in the outcomes that you experience in life.

The Success Codes, discovered by Dr. Alex Loyd, are one such discovery that addresses those issues specifically.