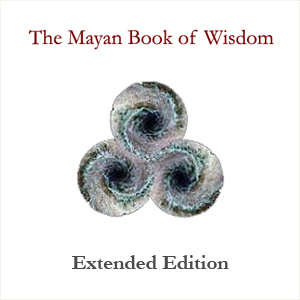 Extending the Loom of Maya, the Mayan Book of Wisdom is designed to be a practical meditation system, facilitating in depth

Extending the Loom of Maya, the Mayan Book of Wisdom is designed to be a practical meditation system, facilitating in depth, sustained immersion into the Qualities of the 20 Archetypes of Universal Consciousness represented by and embodied in the Tzolkin.

General meditation. Stress reduction. Consciousness attunement and brain rewiring, in accordance with the 20 Archetypes of Consciousness embodied in the Tzolkin.

The Mayan Book of Wisdom (MBoW) concludes The Tzolkin Series. The MBoW is designed to be a practical meditation system, facilitating in depth immersion into the Qualities of the 20 Archetypes of Universal Consciousness represented by the Tzolkin. The fundamental purpose of MBoW is to facilitate robust, relatively quick, highly focused meditations on the Archetypes, for persons who are seeking to integrate the Tzolkin into their lives and for general meditation and wellness. Ideal for the lunch break escape, drive to or from work, your acupuncture or chiropractic appointment, the yoga class or simply as nurturing, wellness generating background music.

Every element of the Tzolkin is paired. Each of the Tzolkin’s 20 Sacred Signs/Archetypes are paired. Each MBoW “leaf” embodies 13-minute acoustic translations of one pair of Archetypes, each the direct complement of the other. Listening to the Archetypes stimulates the brain to develop new neuronal connections in keeping with the Archetype’s attributes, thus facilitating the elevation of consciousness. Ideally, one will set aside time to listen to a pair of Archetypes in order to better align one’s neuronal network and consciousness with their complimentary Qualities.

To assimilate these Qualities into your consciousness, we recommend 30-minute meditations, listening to the Sacred Sign pairs (with or without headphones) while pondering on their respective Qualities.

General Use of the MBOW

Maximum benefit from the MBoW can be gained by listening to a complimentary pair of Archetypes in a regular regimen, optimally upon awakening from the night’s sleep and as you’re going to sleep, for a minimum of 28 days before moving on to the next pair of Archetypes. Thus, you experience a much more penetrating and impressive MBOW meditation. (Alternately, you may just casually listen to the translations while you’re working or doing some other activity, receiving both the cognitive enhancement benefits inherent to all of the Tzolkin acoustic translations, along with a less intensive immersion into and benefits from the translations relative to Consciousness.)

We hope these Tzolkin translations assist you in aligning yourself with the currents of Space/Time that progress Consciousness as well as in assimilating the 20 universal Archetypes of Consciousness into your personal experience and expression of Life.

Description for SGS SP from the official site:

Daily, even in adults, the brain spawns new neurons.  Within two weeks, if they are not exposed to intensive stimulation, e.g. an high level of learning or working through puzzles and logic play, they die.  With intensive stimulation, new synapses are generated between them and existing neurons in various areas of the brain.  The generation of these new synapses facilitates brain renewal and recovery from a wide array of neurological impairments, as well as a general improvement of cognitive function in healthy brains.  By its design and Nature, Elvëa SGS provides such stimulation.

Elvëa SGS embodies a Logic, expressing It as multiple streams of complimentary tones and spheres,  One of the most significant consequences of listening to the sonically translated Logic is a very high degree of dynamic brain stimulation.  Adding the visual/light expressions to the audio sequences, the stimulus is greatly augmented and amplified.  As a result, Elvëa SGS provides the user with an highly intensive brain stimulation, directly and dynamically effecting synaptic generation, without the user being required to engage any other activity besides sitting and experiencing its playback.

In just 21 minutes, Elvëa SGS provides the user’s brain with the equivalent of hours of highly stimulating activity which directly and dynamically advances her brain’s ability to make new synapses between new and existing neurons, boosting both cognitive capacity and higher consciousness!

Used with or without headphones, at least twice a day, ideally several times during the day – since it’s only 21 minutes long – Elvëa SGS enriches the cognitive capacities and lives of all who use it. (The maximum benefit is gained when using Elvëa SGS with headphones.)